When I launched this blog nine years ago, one of my very early posts trumpeted the academic successes being achieved by my brother's brood of offspring.  Back then, his youngest lad, Christopher, was a sturdy and cheerful fellow who took delight in knocking a tennis ball around. Well this trait developed (to say the least) and Chris is now ranked by the Lawn Tennis Association as County Champion and no. 3 in the UK for boys aged 18 and under. I  should mention that he is only just 17 and this rank was achieved when he was 16!  I should also mention that Chris is no slouch in terms of academic ability and is currently sitting his GCSE exams and already receiving some tantalizing invitations from US universities. Go Chris! I'm hoping that in another 9 years I'll be writing about a Wimbledon champion.
Posted by Mad Dog at 4:17 PM No comments: 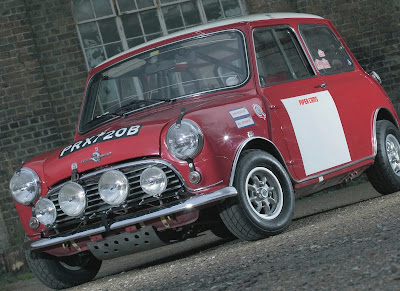 It's gone! After 20 years of continuous classic Mini Cooper ownership (21 years, discontinuous) I'm now no longer the curator of one of these little beasts. An odd feeling but it was time. Rallying will continue but my co-drivership will be on a 'gun for hire' basis. And just in case any of you are wondering where PRX 720B has gone, I'm pleased to say the answer is "nowhere"!  Bill Richards is now its full-time caretaker and the vehicle will remain in the Ashford workshop of Bill Richards Racing where it has resided for the past 12 years.
Posted by Mad Dog at 4:47 AM 2 comments:

Labels: All Things Must Pass, One for the Road, Separation Anxiety

War Stories: RAF Windrush and the Ghosts of Heroes

On my travels through the English countryside I chanced across a disused WWII airfield, RAF Windrush. It's located in Gloucestershire off the A40 Burford to Cheltenham road.  I parked my car at the end of a lane, walked across a couple of fields past a farm* and there it was. A large, shadowless 'blister' hanger,  two smaller Nissen or Quonset huts, the control tower, a pill box, some taxiways and a perimeter path running parallel to a field which was once the main runway. There's something fascinating about old military installations and battlefields: the ghosts of warriors that once occupied these places seem palpable and the echoes of the war machines as they prepared or retuned from battle still ring around the site. Here are a few photos I managed to grab:

Shortly after this excursion, I visited my Uncle. I knew that he was a pilot in the RAF during the war years and I thought he'd be interested in my snapshots. To my amazement he told me that he's be stationed at Windrush and had learned to fly twin engined airplanes there. His training on twins was carried out in Airspeed Oxfords: in wartime operations he flew Douglas DC3 Dakotas, notably resupplying General Wingate's special forces, the Chindits, in Burma.

*Update: 5th January 2014: My Uncle notes that the farm which I mention at the beginning of this article and on which the airfield is now situated, was originally the Sergeants' Mess.
Posted by Mad Dog at 5:24 AM 6 comments:

Goodbye, Ray!   We'll miss your mastery of the Fender-Rhodes keyboard. Say hello to Jim.
Posted by Mad Dog at 4:41 AM No comments:

Labels: Another One Bites the Dust, Ghost Rider in the Sky, Great Gig In The Sky, In Through the Out Door, Ray Manzarek, Rider of the Storm
Newer Posts Older Posts Home
Subscribe to: Posts (Atom)