A few months back I caught veteran virtuoso-psychedelic-prog-metal (or whatever) band, Dream Theatre, at Seattle's McCaw Hall. They put on a spectacular and dreamy multi-media show and all the band members demonstrated masterful instrumental skill. John Petrucci on lead guitar was quite outstanding. To the delight of the crowd DT shredded, meandered and jammed in a way that would have turned Jerry Garcia sativa green with envy: throughout the concert a light show sparkled and exploded like a mini-supernova. Entertaining stuff although I couldn't help thinking that Hawkwind did exactly the same thing (albeit a bit less polished) 45 years earlier...

By all means watch the entire vid from beginning to end but IMHO it's best to start it at around 1'30".
Posted by Mad Dog at 7:21 AM 1 comment:

Labels: Dream On, Dream Team, Paladins of Prog, Theatre of the Absurd 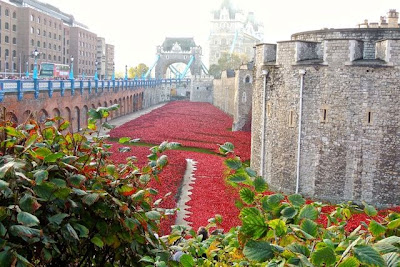 Following my previous post on the courageous WW1 soldier, John Thomas Bloor, I thought it would would be worth reflecting more on The Great War on Armistice Day. The brilliant poppy exhibit at the Tower of London is a poignant reminder of its scale of tragedy.  The nearly 900,000 ceramic flowers that currently fill the moat of the Tower represent just Britain's losses. Entente or Allied forces suffered 6 million deaths: Canada had 65,000 losses. It has been estimated that the conflict cost the lives of up to 37 million civilian and military personnel among all nations involved.  The magnitude of these infernal statistics is hard to comprehend and we should never forget that every single one of those fallen souls had a human story just like Private Bloor. I'll let the photos do the talking... 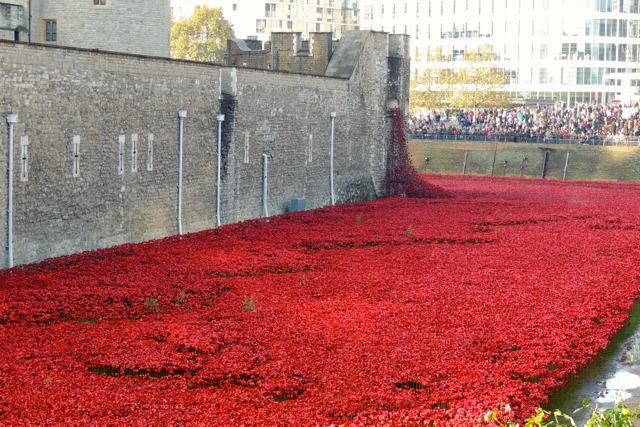 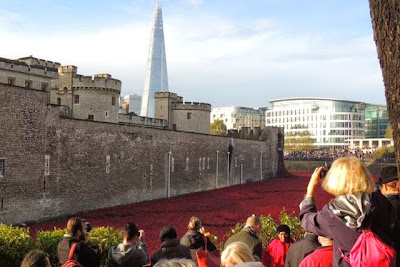 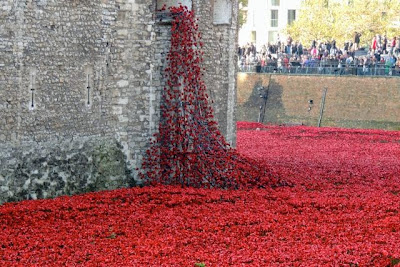 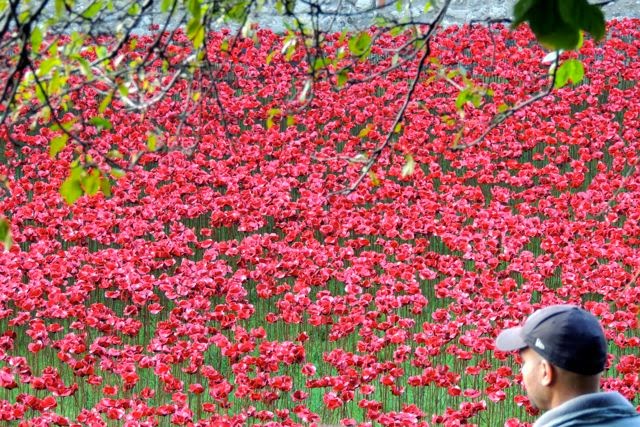 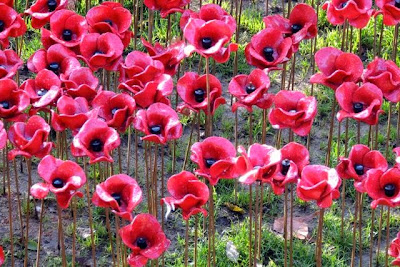 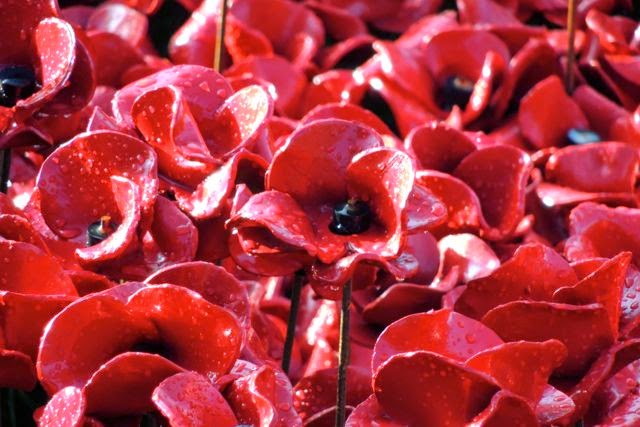 I'll finish up with a verse from Robert Laurence Binyon's immortal poem:

"They shall not grow old, as we that are left grow old:
Age shall not weary them, nor the years condemn.
At the going down of the sun and in the morning
We will remember them"

Exactly one year ago today I published an article about John Thomas "Tom" Bloor (JTB), a valiant Canadian infantryman, killed in August 1917 at the Battle of Hill 70.  Nearly a decade ago, I had become, inadvertently, the bearer of JTB's memorial plaque. I'd had no idea what it was and the name was barely visible but after closer inspection and a lot of research a fascinating story about JTB and his progress through the terrible conflict of WW1 emerged. I posted the story on Armistice Day, 2013 and since then it has attracted a very large number of hits.

As JTB's story unfolded, my sense of obligation to his family increased. It was no longer acceptable to leave the plaque sitting around in my study so I started a lengthy search for descendant family members. I won't bore you with the details but I embarked on a long trawl through parish records, births, marriages and deaths databases and genealogy sites both in the UK and Canada. There were many red herrings and blind alleys but then several rather soft pieces of evidence suggested that some of JTB's siblings may have also ended up in Canada. Eventually I enlisted the help of Dr Ian Bloor, Chairman of the UK based Bloor Society.   The good doctor was quite the wizard and within a couple of days he connected me with Janice MacPhee who he believed to be JTB's cousin two generations on (I believe that is termed "twice removed"). After a few emails back and forth it turned out that Janice was indeed  a surviving relative of JTB and was residing in the northern reaches of British Columbia. I felt that after the odyssey of my detective work on the plaque, it would be quite unsatisfactory to simply mail it off.  Janice and I conversed a bit more and she revealed that she would be visiting Vancouver in the near future. Vancouver is only a couple of hours drive from Seattle and meeting in that vicinity was a very satisfactory solution. Eventually we agreed that we would get together in a town just inside the US border.

Now I had to prepare for the meeting: handing over a 'naked' plaque seemed crass and disrespectful. I scoured eBay and was fortunate to find original inner and outer envelopes for the plaque as well as a 29th Battalion Canadian Expeditionary Force (JTB's regiment) cap badge. I also obtained a facsimile of the honor letter from King George V that accompanied the plaque when sent to the next of kin (thanks to Mr Eddie Fatharly, South Ockendon, Essex, UK). I packaged the items in a walnut presentation box and assembled all the documentation I'd acquired relating to JTB's life and military service. Now I was ready to go...

And so it was that on a sunny Sunday morning last spring I set off with JTB's memorabilia for a rendezvous at a restaurant in Bellingham, WA.  Janice and I identified each other quite easily. She was accompanied by her husband, Dave. They were visiting family members in Vancouver prior to traveling to China for a vacation. We chatted and had lunch and then I handed over the plaque.

Needless to say it was quite an emotional moment.  I won't overly dwell on it here but I did have the sense that I was saying au revoir to a friend: JTB had become a real person as I had written about him and aspects of his character and physical appearance became apparent during my research. I really felt I knew him. However the sense of satisfaction that his memorial plaque was now in its rightful place back among his family was profound: I felt honoured and humbled that I could play a small part in paying tribute to his memory.
Posted by Mad Dog at 3:11 AM 2 comments:

I continue to acquire video clips of musicians whenever I can. It's a hopeless addiction like collecting snow globes or antique paper clips. Anyway my latest offering is of the excellent Ben Smith who I caught on a recent trip to the UK. Here he performs Peter Green's "Black Magic Woman" (à la Carlos Santana). Enjoy!
Posted by Mad Dog at 4:17 AM No comments: