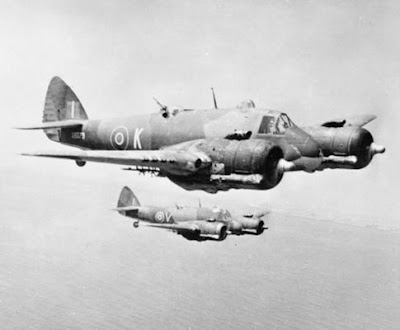 My interest in historic military aviation stems from my early teenage years when I became obsessed with building and flying model aircraft. For some reason the Bristol Beaufighter was always one of my favourite warbirds of the WWII era. It was short nosed, pugnacious looking in terms of aesthetic appeal, and played second fiddle to the faster, sleeker, DeHavilland Mosquito. Nevertheless it was a highly versatile heavy fighter that was particularly effective as a night interceptor (its capacious fueselage easily accommodating bulky early radar sets) as well as in ground attack and marine protection roles. Its primary armament was four forward firing 20mm cannons and six 7.7mm machine guns. In addition it could carry bombs rockets and torpedoes.  Overall it was one the most heavily armed Allied fighter-bombers and packed a formidable punch.

Nearly 6000 Beaufighters were built but sadly there are only one or two left in the world and none are in airworthy condition. Earlier in the year, just prior to a visit to my daughter in Italy, I was intrigued to read of the (re)discovery of a crashed Beaufighter in the village of Gusano, about an hour's drive from Milan. I wrote to the archeological team, Air Crash Po, and received a warm invitation to visit the site.  So on a pleasant day back in June I set off with Olivia and Giulio to the countryside.
The photos below tell the story (for those with ADD and can't cope with still pictures, scroll to the bottom of the page for some YouTube action)...

My thanks go to Signor Pierlino Bergonzi, Professor Agostino Alberti and their colleagues of the Aircrash Po and Gruppo Ricercatori Aerei Caduti teams and the Muzeo Della Resistenza, Sperongia, for making this visit possible.  My appreciation also goes to Giulio Cavalli for acting as chaffeur and translator and Olivia Morrow for her cheerful patience and good humour on a day that can only be described as "blokeish".  Finally I wish to pay tribute to the memory of Officers Horsford and Watson as well as all the brave airmen, regardless of allegiance or nationality, who gave their lives in that terrible conflict.
Posted by Mad Dog at 11:30 PM 6 comments:

Labels: All Things Must Pass, An Officer and Gentleman, Heroes, Tanti Auguri

It's a Beatles Thursday for no particular reason  -well maybe just one (B.B. knows)...

Labels: Too Old to Rock 'n' Roll too Young to Die, Virgin on the Ridiculous, Virgoan Virtue

War Stories: London is Burning and I Live by the River*

My recent trip to Britain's capital and my former home, a flat near Tower Bridge, triggered all sorts of nostalgia. One of these thought threads, catalyzed by the memory that exactly 73 years ago the Battle of Britain was reaching its peak, was an intense curiosity about what life was like in the London Borough of Southwark in those dark war years.

The flat is in Docklands, an area of the city that suffered terribly in the Nazi bombing raids of WW2.  Back then the docks were fully functional and essential for maintaining the supply lifeline to the island nation. So they presented a logical target for German bombers in The Blitz of 1940-1941.  On 7th September 1940, having failed to destroy the RAF, Hitler directed the Luftwaffe to attack London.


On the first night of the Blitz an initial wave of 348 bombers, escorted by 617 fighters, dropped their deadly payloads. A detailed and meticulous account of every bomb blast (there were 843 of them) is recorded here. The rose-coloured spectacles of hindsight tend to depict a romanticized vision of wartime London. The truth is that it was a grim and desperate place. In the following eight months more than 70 heavy raids were recorded, a million properties were destroyed or damaged and 40,000 people were killed. 1651 high explosive bombs, 20 parachute mines and an unknown number of incendiary bombs were dropped on Southwark borough alone. Bomb Sight, the WW2 bomb census organisation, records 136 bomb strikes in the Riverside sub-district of the borough. Half a dozen bombs landed around or actually on the present site of my flat in Mill Street and at least one went off in the adjacent St Saviour's dock. If my residence had existed at that time I would have certainly been rendered homeless or possibly killed.

Of course, the bombing didn't stop with the cessation of the Blitz in May 1941. It continued at lower intensity and decreasing throughout the war however there was a sting in the tail in 1944 and 1945 when a Hitler deployed his V1 and V2 Vergeltungswaffe (Vengeance) weapons. They were both pilotless bombs and launched from sites in France. The V1, which also went by the charmingly folksy nickname of Doodlebug, was a relatively low speed projectile powered by a simple pulse jet. It could be shot down by anti-aircraft guns and fast fighter interceptors, notably the Hawker Tempest.  Nevertheless many got through the British defences and their 850 Kg warheads caused extensive casualties (approximately 23,000 killed and wounded) and property damage. V1 attacks ceased after allied forces captured their launching sites in September 1944. If you don't know what a V1 looked or sounded like you might want to watch this clip.

An even nastier weapon was the V2 rocket. These were fired approximately 100 Km into near space on a long parabolic trajectory. Because they were supersonic, the V2s were impossible to shoot down and could not be intercepted by fighters. And unlike the V1 which announced its arrival by the distinctive "parp-parp" note of its pulse jet, the V2 arrived ahead of the sound wave and was noiseless until its 1000 Kg warhead detonated.  While the V2 could be fired from fixed sites, the preferred method was to launch them from mobile sites (like the infamous SCUD missiles of the Iraq wars), usually in the Pas de Calais. The V2 has the dubious distinction of being the first ballistic missile used in combat and was a truly terrifying instrument of war.

I started out with the intention of this post being about the V2 rocket explosion near my old flat but it's morphed into something quite a bit more. As a baby boomer, I was very used to hearing "war stories" from my parents, their friends and family members when growing up.  As as fan of military history, I knew the phases of WW2 quite well. Yet in digging up the material for this article I was frankly shocked when I was reminded how bad things were...I even started to feel resentful of the "Keep Calm and Carry On" motto (ironically dreamed up in 1939 by the Ministry of Information in anticipation of air raids) currently being used to hawk endless products and services.
Wartime chic isn't!

* My apologies to the late John G. Mellor for borrowing this line from his excellent lyrics without his permission.