War Stories: The Bristol Beaufighter -Déjà Vu All Over Again


On occasions, the business of blogging comes up with surprises and highly gratifying rewards. Following my post earlier in the year about the WW2 Bristol Beaufighter that crashed at Gusano in the Po Valley, Italy, I received a couple of very interesting emails. The first was from Ewan McArthur at Warbird Restoration Services, near Melbourne, Australia. Ewan was able to provide me with a lot of technical information regarding the parts that were recovered from the crash site and we were able to confirm that aircraft was indeed a Beau. The second was from Mr Eryl Powell, a resident of the greater Birmingham area of the UK. Eryl had stumbled across my articles about this crash and had made a connection: his Dad, Allen, a spry nonagenarian living in Criccieth, North Wales, was the regular pilot for John "Jock" Watson who was lost at Gusano.  Back in the summer of 1944, Allen and Jock had become separated while on different missions. Allen realised that his friend had probably been killed but he didn't know any of the circumstances. He was very excited to learn of my blog post and I was equally enthusiastic to be in contact with a WW2 combat aviator. As fate would have it I was due to make a trip from the Pacific Northwest to the UK and so at the beginning of the month I found myself making my way to the Gwynedd area of Wales to meet with this venerable warrior. Here's the story...

Allen Powell (formerly Flight Sergeant Allen Powell, RAFVR) is a super cool gentleman. He's 93, fit-as-a fiddle and remembers everything. He has a calm, unflappable, demeanour that reminds me of my uncle, also a WW2 aviator: I'm pretty sure these pilots were selected for such qualities. For my visit he pulled out a pile of memorabilia and regaled me with stories for several hours. They were frequently hilarious and self-deprecating.  I can't possible repeat them all here but I'll simply document a little factoid  to underscore what an absolute beast of a war machine the Beaufighter was.  Its armament in terms of guns comprised four Hispano-Suiza 20mm cannon and six Browning .303 machine guns making it the most heavily armed Allied fighter of WW2.  Allen told me that when all these guns were fired together, the recoil slowed the aircraft by 30mph (something the pilot would have to take into an account when making an attack): a great practical example of Isaac Newton's third law of motion!

Allen's pilot's log book (see below) documents multiple enemy engagements: ground attacks, shipping strikes and dogfights, however he talked very little about actual combat and I suspect the memories still haunt him.  When I asked him what thoughts ran through his mind when going on a mission he replied "I just wanted to be at home".  Humility and honesty are certainly characteristics of true greatness!

With regard to the loss of Jock Watson, Allen explained that back in the late summer of 1944,  he and Jock were the reserve flight for a mission. They were in good spirits as they had virtually finished their tour of thirty missions and had not only developed a close working relationship but had become good friends. At that time they were due to be sent back to Britain for some rest and recreation. Specifically they were planning to visit Jock's home in Jordanhill, near Glasgow (and I guess doing some serious partying).  However it was not to be.  Jock was co-opted to fly for another pilot whose own navigator had been taken sick.  Sadly he flew off and was not seen again and reported "missing".  Allen waited around for a couple of days but when Jock didn't return, his Commanding Officer cut  his tour slightly short as there was no chance of finding him a navigator for the one or two missions remaining.  He was then instructed to fly to Cairo and then on to Cape Town (an epic flight in itself) where he was shipped home.

Allen never did find out about Jock's fate although decades later he noted Jock's death when it was published in the Commonwealth War records. He was certainly deeply affected by the loss of his friend.  Fast forwarding a few more decades, the details of the Gusano crash were released and as a result I spent a pleasant Saturday in June investigating the site and wrote up my visit as a quite casual account on this blog. I never expected it to have such positive consequences and I hope I've been able to bring Allen a little closure on this tragic incident.


Concluding Comments and Appreciation
I'm still amazed that my almost accidental trip to take a look at the Beaufighter crash site and my rather casual posting about it on this blog has been so consequential. Not only have I indulged my boyhood interests in old military warbirds and learned a lot about the technical specifications of Bristol aircraft, but I've met (some face to face, some online) a number of very nice people around the world. Apart from Gusano, Italy, I've also been reacquainted with the stark splendour of North Wales (I haven't even mentioned my side visits to Criccieth Castle or  the delightful Portmeirion Village) and spent almost a day poking around the RAF Museum at Hendon where I took so many photos I exhausted the battery in my camera and my phone. I'd like to think my correspondence with Ewan McArthur re-kindled his own interest in the Beaufighter and caused him and his colleagues to turn over the engines of the one resident in the Australian National Aviation Museum at Moorabbin (and maybe even consider its restoration). I've also had the had the privilege of meeting and talking to a real Beaufighter pilot and hero...(Allen, this has hardly ever happened to me but I actually felt slightly starstruck in your presence).  Finally I've been reminded of the horror and personal tragedy of war.

Again I'd like to express my appreciation to Signor Pierlino Bergonzi, Professor Agostino Alberti and their colleagues of the Aircrash Po and Grupo Ricercatori Aerei Caduti teams and the Muzeo Della Resistenza, Sperongia, for making my original visit possible. My thanks also go to Ewan McArthur for not only contributing his knowledge of the Beaufighter but also giving us the thrill of seeing the engines of one of these great planes being turned over for the first time in decades (even if just briefly and on YouTube).  A big "diolch yn fawr" goes to Eryl Powell for putting me in touch with his Dad, Allen, who has my immense gratitude and respect for his service as well as putting up with my questions for a couple of hours and making available a veritable treasure trove of photos and other memorabilia.  Diolch should also be said Anwyl Cooper-Willis who acted as my taxi driver and scribe on this trip. As per my other posts on this topic I'm dedicating this article to the memories of Flight Sergeant John Horsford, DFM and Warrant Officer John "Jock" Crockatt Watson as well as all the brave airmen, regardless of allegiance or nationality, who gave their lives in the terrible conflict of WW2.

P.S. Some unanswered questions about the Gusano crash remain. I haven't dwelt on them here. Suffice to say I'll write of any updates as they occur.

P.P.S. I would very much like to establish contact with the families of Officers Watson and Horsford: if any reader can help me with this I'd be most grateful (just write me a note in the comments section  -I do read them)

P.P.P.S. January 27th, 2014. This might be worth a separate post and I'll maybe do it sometime in the future (for now I'm trying to preserve the continuity of my ramblings on digital music) but Mr Powell's son, Eryl has scanned all his Dad's RAF memorabilia and put the files on a dedicated, open access site -see here.  It's a glimpse back into the dark days of WW2 and makes fascinating reading.
Posted by Mad Dog at 11:54 AM 6 comments: 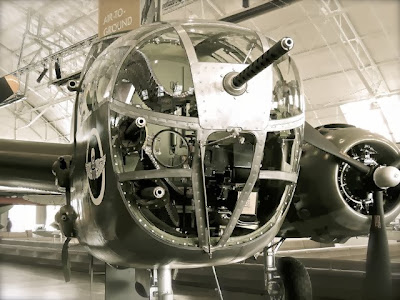 I've got several new articles in the works but I'm on the road and internet access is maddeningly inconsistent. So please be patient while I trundle along. Normal service will be resumed as soon as possible. In the meantime here's a nice picture of a Mitchell B25 bomber (think "The Doolittle Raid") that I snapped at the Flying Heritage Collection a month or so back...
Posted by Mad Dog at 12:04 PM 2 comments: